You are here: Home / Blog / Tribute To An Irish Beauty… 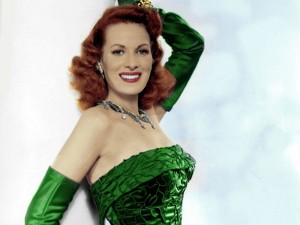 Another of my favorite old-time actresses has died at the age of 95 – the legendary Maureen O’Hara. I’ve been a fan of her movies since I was a young child. What endeared me to her first was the fact she was Irish like I am. Secondly, it was how frequently people told my mother she looked like Maureen O’Hara.  I grew up watching Maureen O’Hara movies along side top leading men such as Errol Flynn, Tyrone Power, Douglas Fairbanks Jr. and of course John Wayne, who called her “his best leading lady.” Perhaps, the movie Maureen O’Hara will be most remembered for will be “Miracle On 34th Street”… which is another reason for my fondness of her. Growing up in NYC I went to the Macy’s Thanksgiving Day Parade and to see Santa at Macy’s on 34th Street every year.

We’ve lost another great old Hollywood actress and feisty Irish lass, there will never be another like her. RIP Maureen O’Hara.

“Above all else, deep in my soul, I’m a tough Irishwoman.”  ~Maureen O’Hara~

Designed From The Heart…

Sweet child of my dreams…
destined never to part.
No love is held dearer…
than in a mother’s heart.
~ By Georgene © ~

Treasure the moments of motherhood they slip through our fingers so fast. Don't ever take them for granted... for babies, like moments don't last!
~ By Georgene © ~

Though I have a jewelry box filled with gems galore... my children are my most priceless jewels, my wealth...my hearts treasure.
~ By Georgene © ~